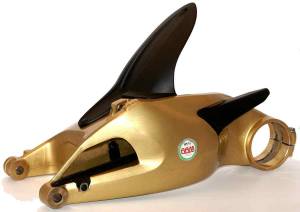 "MONSTER 1100""RAM MAGNESIUM SINGLE SIDED SWING ARM SUSPENSION" The RAM Italia project for designing a sssarm in magnesium for the New MONSTER 1100 to replace the aluminum stock suspension started in the second half of 2009. Scope of the project was making a drop fit magnesium suspension to be: 1.identical to the aluminum stock suspension in terms of strength but2.longer by 12 mm. for improving road traction and stability and3.lighter then stock by 30% in terms of unsprung weight. "FEW WORDS ABOUT THE INFLUENCE OF UNSPRUNG WEIGHT OVER BIKE PERFORMANCE"
•The law about the influence of un-sprung weight over bike dynamic performance, which is defined by the absurd equation 1 equals 8, is known and globally accepted.
•The concept is that by diminishing the un-sprung mass of a bike suspension by 1 weight unit, such diminution will have an influence 8 times larger over the bike dynamic performance.
•In other words, 1 Kg reduction to a suspension un-sprung weight is dynamically equivalent to lightening the bike curb weight by 8 Kg.
•If you consider that the RAM magnesium sssarm for the MONSTER weighs only 3,500 grams, the un-sprung weight decrease amounts to 1500 grams or 30%. 8 times 1500 grams corresponds to a lightening of 12 kilograms
•Those of you who tried lightening the curb weight of any bike have realized the importance of an improvement of 12 Kg that is immediately available by installing a RAM magnesium sssarm, an improvement added to others, like better traction and stability due to the RAM sssarm lengthening.